One of William Sewell’s innovations as Warden in the 1850s, was to set up a fire brigade, complete with a pumping engine. By 1866, the original idea had faded a little:

…if a fire were to break out there is nothing to meet it but an engine which only two or three people know how to manage … In addition to this, the fire-engine is put away in a place very difficult to get at, being blocked up by three or four heavy oak desks … May I venture to suggest that a fire-brigade might be instructed in the management of the engine… (The Radleian, June 1866)

The fire brigade lasted for well over a century. In 1961, ‘The Fireman’ featured as no. 13 in the series ‘Heroes of our School’. In 1965, they celebrated their jubilee with new equipment – a Coventry Climax pump. But they had not doused a fire since bringing down the Wilson Library ceiling in 1902 – an event celebrated in verse at the time: 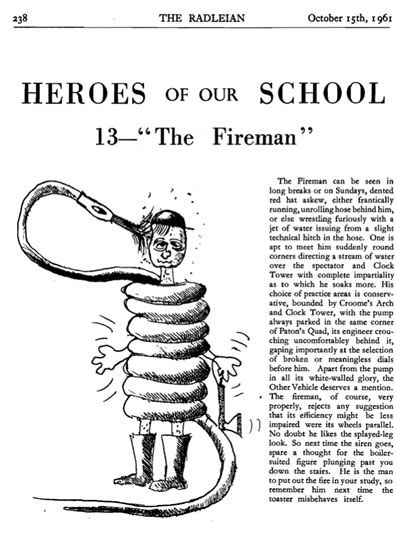 The pluck of the Fire Brigade

‘Forward the Fire Brigade!
Make for the house,’ they said:
Speeding from Abingdon
Tore the two horses

When can their valour fade?
O what a sight they made,
Wielding the fire-hose –