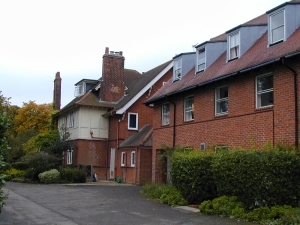 This Vale for Orchard House appeared in The Radleian, 2007

Orchard House has been in existence, in one form or another, for 28 years and yet even now, towards the end of a noble, colourful and sometimes controversial term of office many boys, Dons and parents have little idea of what it is or was.  In this article, which includes facts and figures provided by the three long term Tutors, I hope to answer a few of those questions.  I also make no apologies for adding a few anecdotes that have given CJB, CWH and MRW (and dare I say JAW) grey hairs and great smiles over the years…..

Why was Orchard House created? All sorts of rumours abound.  The best one being that ‘girls’ were about to arrive in the early 80s and they needed a place of residence.  The more likely reason however is the fact that boys were residing in all sorts of areas around College: The Mansion, The Warden’s House and in the homes of various Dons.  It made sense to build a House to accommodate more of the boys and hence Orchard House was born.

What does Orchard House represent?  Students of social engineering could write a thesis…..  It has performed many roles and as with any good actor it has not been stereotyped but has adroitly coped with the changes in mode with a combination of star and bit-part roles.

In the early days, it provided study-bedrooms for the VIth form. It has been where ‘naughty’ boys, or those who could not see eye to eye with their Tutor, have been sent so as to be out of Social. It has been an academic hothouse filled to the brim with potential Oxbridge candidates: of the first set of Vths who came down in April 1995, seventeen subsequently won places at Cambridge or Oxford. Probably the most important role the House has played is in providing residence and a positive, creative atmosphere for that small group of boys who flourish in a more personal and quiet environment.  It has also been a ‘Hall of Residence’ during which time boys have had to look after each other far more carefully as there is no matron or live-in sub-tutor – they learn independence.  It has given many boys the opportunity to mature in a more adult environment.

What was the Tutor’s role in Orchard House? He is not involved in filling the school or dealing with parents in the same way as a Social Tutor:  there are no prospective parental interviews, no long end of term reports and the boys are still fundamentally part of their Social so his ‘real’ Tutor never really lets go of the apron strings (rightly so).  However with no Matron or living-in Sub-Tutor feeding, lighting, first aid (particularly ice packs), laundry, room inspections, birthday celebrations, and minor (sometimes major) TLC became a significant part of the role.  Formal and informal meals have also been a routine of Orchard House life for years, as have visits out of School doing such things as greyhound racing, go-karting and even grape-picking!  There is no job description and in truth the ‘Tutor’ of Orchard House is a combination of Tutor, Sub-Tutor (living-in and living-out) and Matron.  Personally I will never be the same again.

How long have boys stayed?  This has varied over time.  For many years boys were expected to arrive in the summer term of the Vth and stay for a total of three terms.  This worked well for many years as it created stability and friendships within the house.  As the School has changed both naturally and with pressures from Inspections it was inevitable that Orchard House also had to adapt.  In the last five or six years it opened its doors to Vth forms at an earlier stage and also encouraged 6.2 to come down.  This created a colourful and positive atmosphere.  The duration of stay also changed from the three terms to a suggested minimum of two terms but an open ticket to those who wanted to stay longer.  Some boys actually arrived at the start of the Vth form and stayed until they left school.  Several completed their VIth form in Orchard House.  Having older, hard-working and talented boys did mean the House was more like a Social with a greater spread of age groups, for a period of time.  For the most part the elected Head of House will usually have spent some time in Orchard House before his promotion.

A few collective memories (good and bad) from Tutors of Orchard House over the years:

It has been a unique institution that many boys have gained a great deal from.  I think Orchard House is proud to have been a ‘House’ and not a Social and it has helped many boys take that big step to University just a little more easily. There is a sense of poignancy that the House will be gone forever.  It therefore really should be remembered in some way, as it has been a unique and important part of the history of Radley. 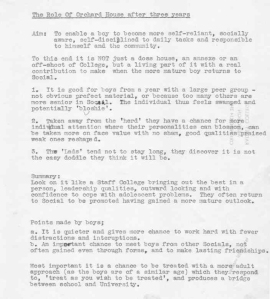