Aerial view 2015. The restored avenue of Cheesers retains 18thC sweet chestnuts at the west end, and later planting along its length. This clearly shows the scale of the original avenue. The stripes in the pitches emphasise that Jackdaw Clump is on the line of the 1761 avenue directly in line with the front door of Mansion, and Dormitory Clump was along the same line. The serpentine line of Kishon snakes across the golf course. The hedges along the College bounds mark boundary ditches, some from 1761, others (around Little Wood) showing the serpentine style of Capability Brown. © Radley College

1844 Radley Hall School closed. Two short-term tenants, 1844-47
1844 Didcot to Oxford railway opened. Branch line Abingdon to Radley opened in 1856. This was a much faster and safer route to London and Oxford. It also passes on the opposite side of the Park to the old turnpike road, thus making the Lodges and Cheesers redundant as a formal entrance. (Drysdale et al, 2002. 71)
1847 Radley College founded. First visit by William Sewell and Robert Singleton
Singleton: There is no stable nor coachhouse, save some very dilapidated buildings and a ruinous barn. This implies minimal use of them by the Kents and that the separation of Park from house rendered the long approach from the turnpike unusable.
Sewell: (RThe line of the Dormitories was marked out by Dr Sewell himself walking about with a measuring tape in hand, choosing the sites so as not to interfere with the big trees.
The landscape was admired by Singleton, especially a grass sward in front of the house where the boys can play cricket but no mention was made of Capability Brown 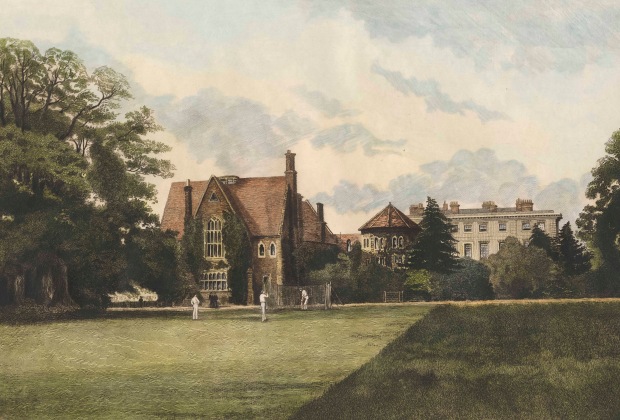 Dormitory Clump, painted by Barraud in the 1880s, shows the boys playing cricket in front of the dormitory, with Dormitory Clump to the left. ©Radley College Archives

1888 Radley College buys the freehold of the Radley Hall estate
1897 Lord Addington, OR & Trustee, plants Chestnut Avenue along the path to Kennington road, signalling that the main entrance and focal point for access to Radley College is now directed at the railway station in the village, no longer to the Oxford turnpike
1897 Raikes’s 50th anniversary history of Radley College. No mention of Capability Brown when describing the landscape. 1925 revision by Bryans also fails to mention Brown
1900s Edward VII gives trees to be planted along the avenue at Cheesers. Probably those closest to College Oak
1930s FJ Nugee plants the hornbeams avenue from G Social to White’s Lane
1940 Dorothy Stroud begins work on Capability Brown
1947 AK Boyd (Archivist & Historian of Radley College) publishes 100th anniversary history of Radley – no mention of Capability Brown
1950 Dorothy Stroud publishes Capability Brown, the first study of his life and work since the 1780s. She listed Radley in chronological sequence before Rycote on information drawn from Brown’s only surviving account book. No other book on Capability Brown included Radley until Roger Turner’s comprehensive gazetteer in 1985 (2nd edn 1999). Stroud’s book was acquired by the Library in Radley College in the 1950s/60s
1968 AK Boyd visited RHS Lindley Library and confirmed the entry in Capability Brown’s Account Book 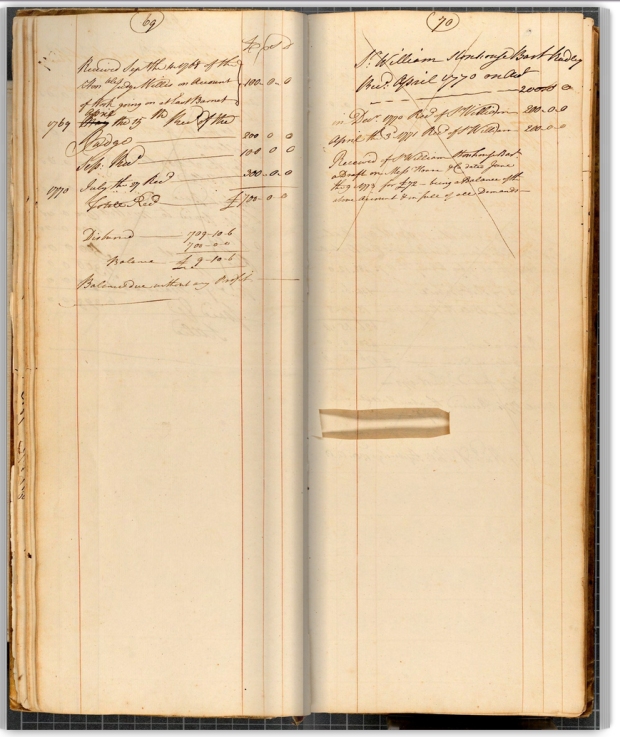 1970 Poem ‘Dormitory Clump’ by Peter Way, OR & Don at Radley. The first public acknowledgment at Radley of Boyd’s research: Way described the trees as ‘Capability’s Clump’. The poem commemorates the felling of the clump because of old age.

December the month, the axe-edge of winter;

Root and trunk ravaged by buzzsaw and spade.

In surgical savaging, tree after tree.

Towering over Croome’s, high above roof-top.

You still feel the ghost limbs you no longer see.

Past in procession, from seedling to stump.

1970
1980s Golf course constructed around Kishon, College Pond and Cheesers
1986-9 Hugh Cardwell attempts to reconstruct Brown’s work by comparing field acreage changes between the 1633 and 1768 terriers, and suggests inner and outer ha-has. Attempts to reconstruct the line of Bowyer’s canal in 1811-15 and claims it incorporates Brown’s outer ha-ha/park boundary ditch. This was disproved in 2016
2016 Field survey by David Anderson, Andrew Sargent & Clare Sargent plots the surviving features of Brown’s landscape and the earlier garden design for the Capability Brown Tercentenary. 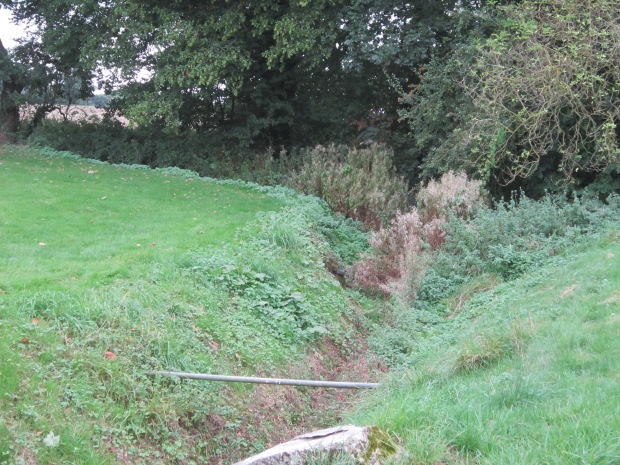 Tracing the landscape. A right-angled ditch at the edge of the golf course exactly corresponds to the Park boundary shown on Rocque’s map. © Andrew Sargent

So what did Capability Brown do at Radley?

Probably Capability Brown
• Ha-ha surrounding Mansion to south.  In the area of G Social Patch, but lost irretrievably when the area was excavated for the new chapel in 1895
• Shelter planting to east (including White’s Plantation)
• Old main avenue from north rooted up, clumps left, only Jackdaw Clump now survives and probably replanted
• West lodges built.  Finally lost in the 1920s
• Pond reshaped; presume a (wooden?) bridge
• The Park boundary changes from a rectangle to a more curvy shape, though the south-west preserves straight lines and a right-angle corner
• Park boundary more clearly defined. Probably no bigger than an ordinary field ditch.
• Shelter belt on Oxford Road
• Possibly new serpentine walk through a shrubbery to the village church
• Shelter belt to south-west – why?
• Little Wood reshaped – why?
• A few trees and clumps in the Park – but main outlook is to the south towards the Berkshire Downs
• Possibly replaced the lost formal gardens to the south of the House by walled gardens on the Kennington Road approach