Turner’s watercolour of the north front, the 1830 OS map and the 1842 tithe map hint at a tree-lined serpentine path leading through trees from the south-east side of the house.  This may be what was accessed from the ‘Shrubbery Room’ listed in the 1815 auction catalogue.

The path to the shrubbery. Photo by William Wood, 1859. C. Radley College Archives

Such serpentine paths were typical of the work of Capability Brown and it is possible that the picturesque, romantic nature of the Shrubbery was originally his work.  However, it is also possible that this path became more important once the park and house were in separate use after 1819.

A key feature of Capability Brown’s work was the construction of picturesque park buildings as features in the landscape. Maps and drawings show several buildings in the Park at Radley: the west lodges, the ‘old garden gate’ and Park Cottage.

The West Lodges on Lodge Hill.

Turner drew a pair of west lodges. These are not shown on Rocque’s map, but one lodge building appears on all later maps until 1914.  Turner’s sketch of the west lodges shows a paling fence defining the edge of the Park, and a short avenue. 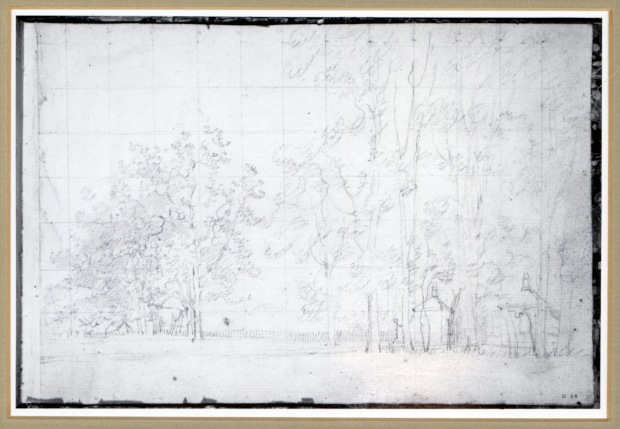 William Turner, 1789. Sketch of the west lodges at Radley Hall. Originals are in the Tate Gallery. This is taken from a copy made for Radley College in the 1940s

The two lodges drawn by Turner are remarkably similar in design to the two lodges Capability Brown designed for Stowe. The Boycott Pavilions at Stowe were originally joined by gates and railings.  The right hand pavilion was inhabitable; the left was a purely ornamental building.  It may have been the same at Radley: one of the lodges shown on later maps as a much larger building to the left of the entrance when approached from the road; the second building seems to have become derelict and demolished within 50 years.  In 2016 an area of hard-standing very close to the entrance at Lodge Hill may be the site of the lodge which survived in use until the 1920s.

The Boycott Pavilions at Stowe. illustrated by Benton Seeley, 1750.

Another lost building of Radley is ‘the old garden gate’ drawn by E Burrows in 1909.  Its location is unclear from her engraving, but it is traditionally described as the ‘Elizabethan’ gate into the walled gardens. However, the style is much more 18th century than 16th or even 17th, and it is possible that this also was designed by Capability Brown to form an entrance to his serpentine shrubbery into the formal gardens.  The walled gardens area is itself an enigma.  It is a long way from the Mansion, on the Kennington Road side of the estate.  Some of the accounts of Sir John Stonhouse in the 1780s are payments for seeds, garden mats and a sundial, which may indicate that this area also was the work of Capability Brown or his immediate successor, replacing the formal gardens to the south of the House which were swept away to create an open vista across the ha-ha.

A building which pre-dates Capability Brown is Radley Park Cottage.  It is clearly marked on Rocque’s map in 1761 and on the 1914 OS map, but is now a ruin.  It is possible that this has monastic origins and may have been a cottage for Abingdon Abbey’s park-keepers, or for the Stonhouse’s huntsman/game-keepers. >>>Rocque’s Map of Berkshire, 1761>>>